The original part of the house was built in the early 1900's as a private home for a local lawyer.  In the mid 1900's, the house was sold to St. Mary's Parish to be converted into a convent to house the nuns that ran the catholic school.  Some changes and an addition gave the convent ten bedrooms, a chapel, a dining room, and a new kitchen.  For about 40 years it served St. Mary's, but with fewer and fewer nuns, the house was not used any longer as a convent.  The first floor was then used for a pre-kindergarten class.

In August of 1989, the Gilson family purchased the convent (people still refer to it as the old convent) and moved in with their children.  The chapel, the kitchen, the laundry, the confessional, and the piano room were turned into a daycare called the "Playhouse Daycare".  The bedrooms, known as the nun's cells were converted into an apartment.  The Gilson family lives in the original part of the house.

The summer of 2004, The Gilson's renovated what was once the Day Care to the current Bed and Breakfast.  The chapel is now two bedrooms, one with part of the original confessional in it.  The dining room is now a bedroom, also referred to as a cell.  The piano room is now the gathering room.  The kitchen is in its original place and has been remodeled.

The name Felician means friendship.  The Felician Nuns, the Sisters of St. Felix of the St. Cantalico (a polish order of nuns from Buffalo, NY), and the Gray Nuns are the reasoning behind the name given to this once convent, later daycare, and now Felician House Bed and Breakfast. 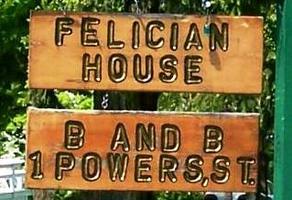 Print | Sitemap
Member of: The St. Lawrence County Bed and Breakfast and The Canton Chamber of Commerce
Login